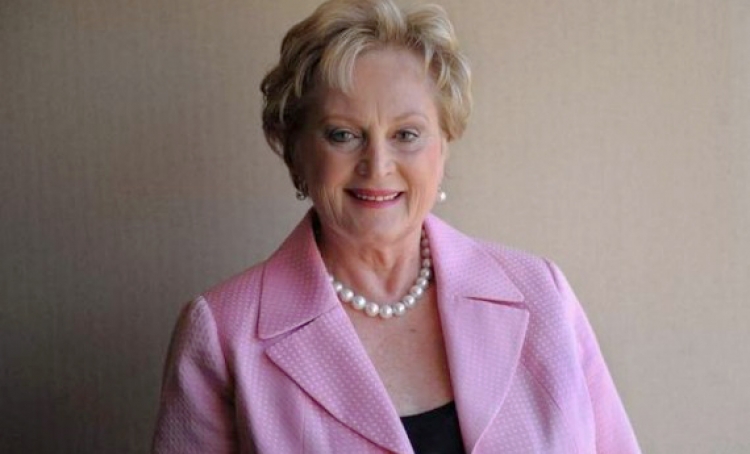 Good afternoon.  I’m very pleased to join you today, and hope that the information I will be sharing with you – thoughts about why the United States is lagging the rest of the developed world in K-12 education—will give you a perspective on this critically important issue which we, as a society, must take immensely seriously.

President Kennedy said, “Children are the world’s most valuable resource and its best hope for the future.”  As the world’s richest country, one would think that our resources directed to our children’s education would yield better results.  Our global world today demands more than ever that our children are well prepared, that they can compete and are highly skilled.

Preparing our youth to take their place as productive members of society is the most important responsibility we have to our children.

In every country of the developed world, significant credit for advancement must be given to the existence of an educated populous.  It has provided a platform for growth and development, innovation, economic success and improvement of the human condition.

Throughout history, the world’s greatest minds were advocates of compulsory education… Plato’s The Republic written in 360 BC, addressed this issue; so did the Jewish communities in the first century A.D.

In Germany, Martin Luther called for establishing schools in 1524, as he wanted everyone—boys and girls, men and women—to be able to read the Bible.  In 1592, the German Duchy Pfalz-Zweibruckern became the first territory of the world with compulsory education for boys and girls.  In 1647, the Massachusetts Bay Colony passed a law requiring towns of 50 or more families to hire a schoolmaster who would teach children to read and write.

In 1852, compulsory school attendance was adopted by Massachusetts, which required every town to create and operate a grammar school. Over the next 65 years, compulsory school requirements spread to other states, with Mississippi being the last to adopt in 1918.   By 1910, the number of American children attending school had increased to 72%. After 1900, High Schools became available in many cities—but were lacking in rural areas.   It was not until the end of WWII that a high school education was consistently available in all areas of the country, to both sexes, and to all races.

Today, the U.S. is still the world leader in higher education with its many excellent universities.  Unfortunately, it has lost its edge in K-12 education.   In the 2012 PISA exam (Program for International Student Assessment), which is given to students in 65 developed nations, the U.S ranked 27th in math, 20th in science, and 17th in reading.    At 72%, our high school graduation rate now trails behind Denmark, Japan, Poland, Finland, Switzerland, the Czech Republic, France, Belgium, Ireland & Slovakia.    A generation ago, the United States had the largest share of college-educated citizens in the world.  But by 2011, we fell to 16th, out of 34 developed nations, for those ages 25 to 34 who had earned a college degree.  South Korea ranked first, at 63%.  Canada placed 2nd at 56% and the U.S. 16th at 41%.

On the bright side, in every state there are schools that have marks of distinction.  In Indiana, Carmel, Zionsville, the Signature School in Evansville come easily to mind—although these schools are located in more affluent communities, with a higher socio-economic demographic. But, we are also seeing  schools distinguish themselves through strong leadership in inner city environments.

In her 2013 book, The Smartest Kids in the World, journalist Amanda Ripley asked foreign exchange students to compare their experiences in the U.S. system.  She also asked the same question of U.S. students studying in South Korea, Finland and Poland.

The U.S. students studying abroad found the classwork more challenging.  They reported that their classmates understood the value of education, and their teachers were serious about their craft.  Schools had coherent curricula and common standards.  What matters to students and families in these countries is getting an education.

By contrast, foreign students in the U.S. found the strong connection between sports and school most puzzling.  They regarded their American high school experience to be lacking in challenges and a clear focus on the objectives to be achieved.

In education circles, the Finnish model has received much attention of late.     In recent years, Finland has reformed its educational system, and increased its PISA performance significantly, ranking considerably higher than Norway and Sweden, with similar student demographics.

What is surprising is that some of the characteristics of the Finnish model are quite opposite of the reform initiatives we see in the U.S.  In particular—significant differences are found in the use of standardized tests, the role of vocational education, and the quality of teacher preparation.  For example, the only standardized test used in Finland is the “graduation exam” at the end of students’ senior year in high school.  Their once highly-centralized system emphasizing external testing has been replaced with a more localized system, with curriculum designed by teachers.

Mandatory education in Finland does not begin until age 7, and at age 16 students stream into either an academic track or a vocational track for high school.  About 90% of Finnish students complete high school, and about 40% of these are on a vocational track.  This is a major difference between the approaches used by most OCED countries vs.  the “one-size-fits-all” approach of the U.S. education system.

But, perhaps the biggest difference is seen in the quality of teachers. The admission into Finnish schools of education is highly competitive.   Most teachers come from the top 10% of their class, and teaching is seen as a profession of prestige and recognition.     It is not uncommon for aspiring teachers in Finland, after high school, to spend a year as a classroom aide to help boost the odds of being accepted into a teacher preparation program.

In the U.S., the landscape is very different.    Admission into schools of education is minimally competitive and coursework is not considered especially challenging.  This is a stark comparison to Finnish preparation, where teacher training selectivity sends a strong message to everyone in Finland that education is important—and that only the best can do it.

Still, there is hope on the U.S. horizon.  In Rhode Island, state leaders have already agreed to require its education colleges to admit classes of students with a mean SAT, ACT or CRE score in the top one-half of the national distribution by 2016.  By 2020, the average score must be in the top one-third of the national range.  This would put Rhode Island in line with education superpowers like Finland and Singapore.  And, ten years ago, Rhode Island was known for having the lowest bar for entry into its schools of education.

Our current linear system—where college is seen as the appropriate track for everyone—does not work.  It is not producing college-ready graduates, nor is it producing young adults ready for careers or employment.  According to a 2012 study produced by Complete College America, on a national basis, more than half of college freshmen who were pursuing 2-year degree programs required remediation in some subjects.  Four out of every 10 of these students dropped out without even finishing the remediation courses.   Among those students seeking 4-year degrees, close to 20% required remediation.

It has been estimated that 2 million teachers will need to be hired in the next 10 years to accommodate growth and to replace teachers who retire or change careers.  This speaks to a problem of horrific proportion.  How will we address this challenge?  And what critical questions must we ask to which solutions need to be found?  Here is a sampling.

Still, in the face of our current challenges, there are schools, principals and teachers throughout the country who have accomplished extra ordinary results in lifting their schools to new heights.    Our new Indianapolis Public Schools Superintendent, Lewis Ferebee, is demonstrating creative leadership and a willingness to implement new ideas.  That is exactly what IPS has needed --- innovation and accountability.

Over the years, increasingly prescriptive requirements have put a stranglehold on classroom creativity.  This was one of the drivers behind the charter school movement—to give charter schools the freedom to innovate and to achieve better educational outcomes.    The results to date are mixed.

Two recent studies by Stanford University have shown that Indiana’s charter schools have generally performed well when compared to charters in other states.  In fact, the Stanford researchers rank Indiana charter schools as among the nation’s best at getting students to earn higher test scores than they would have earned if they had stayed in their traditional schools.

Vouchers began in Indiana 3 years ago.  This year it is estimated that about 25,000 kids are enrolled in private schools through this program.  That compares to about 35,000 students currently enrolled in Indiana’s charter schools, after more than 10 years of activity.  Urban Catholic schools have seen a significant enrollment revival with the introduction of vouchers.

The reason for the rapid growth of vouchers is understandable.  The state’s voucher law is unique in its breadth, allowing far more students to be eligible than in other states.

The voucher program has grown more rapidly than charters largely because it is easier to implement.  Charter schools require significant resources to fund their facilities costs and capital expenditures.  Charter schools are accountable to their authorizer.  In contrast, voucher kids simply get absorb in an existing private school.

What is certain is that regardless of school structure—public, private or charter or vouchers —the role of the school in the 21st century has changed.   Our experience after 15 years of operating Christel House schools in Mexico, Venezuela,  South Africa, India—as well as our charter schools in Indianapolis—has led us to the conclusion that to succeed with underserved, at-risk children, the school must increasingly take on the role of a surrogate  parent.

Today’s schools must teach values, manners and comportment.  They must insist on good behavior, grooming and dress, and should instill healthy lifestyle habits—from teaching good food choices and drug and alcohol avoidance, to providing honest and early sex education.  And we need to teach how to be responsible citizens.  We need to teach that living in a democracy has benefits and responsibilities.  Look at our voting records…absolutely abysmal.  The Center for Civic Literacy at IUPUI reports that only 36% of Americans can name the three branches of government and only 21% of high school seniors can identify two privileges US citizens have that  non-citizens do not.  What a sad state of affairs. Our schools need to be places of learning and of enrichment.  When this doesn’t occur at home, schools need to help students set goals and develop life plans. They need to have a clear picture of their future and a focus to pursue that future.

What I’ve just described is essentially the CH model. I have a passionate belief that children of poverty can succeed, spread their wings and accomplish remarkable achievements.

Consider some of the recent successes CH kids have achieved:

Nelson Mandela, whom I much admire said, “There can be no keener revelation of a society’s soul than the way in which it treats its children.” What does it say about the soul of our community and our country if we are not innovative in creating an effective system of education for the 21st century that will provide multiple pathways for our children to succeed?  We need systemic change, but do we have the political will and the determination to do so? If we do, it will pay big dividends. Our kids and our state and our country deserve that.  Thank you for your kind attention.
Learn More
About Our Difference
Learn More
About Our Programs
Learn More
About Our Schools