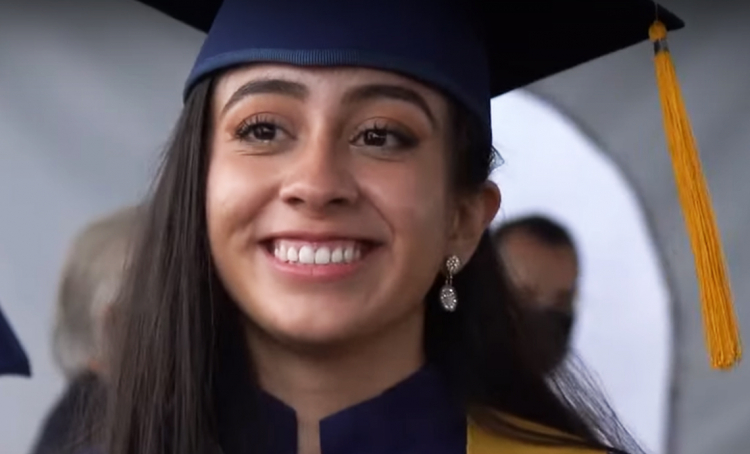 Alexa Q. (Ale) knows hard work. A 2022 graduate of Christel House Mexico (CHMX), she’s the recipient of the Deloitte Scholarship for the Universidad Panamericana (UP) to study Finance and Administration. It’s a 100% full scholarship that required months of tough tests and challenging essays, culminating in a series of in-person interviews – and Ale did it! “When I received the email telling me I won the scholarship, I couldn’t believe it was true,” she says.

“This is an enormous accomplishment,” says Harry Guest La Vercombe, CHMX College & Careers Manager. “UP is an extremely difficult university to get into and the Deloitte scholarship is granted to only a select few students each year based on academic achievement and economic need.” Ale describes the extensive process as a series of phases over several months. “The first phase was taking the admission exam which was really difficult,” she says. “When I passed the exam, the second phase was an interview with the Director of Careers at the University, who decided I had the aptitude and characteristics the career required. Phase three was writing an essay about "What had been my greatest achievement and why?” Ale admits she grew nervous as she continued to move forward while classmates fell out of the process. Phase four was a series of personality and psychometric tests. “The fifth phase, which was the most difficult for me, consisted of a debate with the other finalist where you had to resolve a case about financial consultancy on your own.” In the last step, Ale participated in individual and group interviews with Deloitte staff members. Now living in the UP dorms (a rarity as most commute from home) La Vercombe reports that while classes are a challenge, Ale is having the time of her life. “College & Careers helped me to prepare for this process,” says Ale. “They gave me the tools, helped me develop skills, and supported me to manage the stress!”

Will you consider a gift to help support the College & Careers program? Click to make a donation.