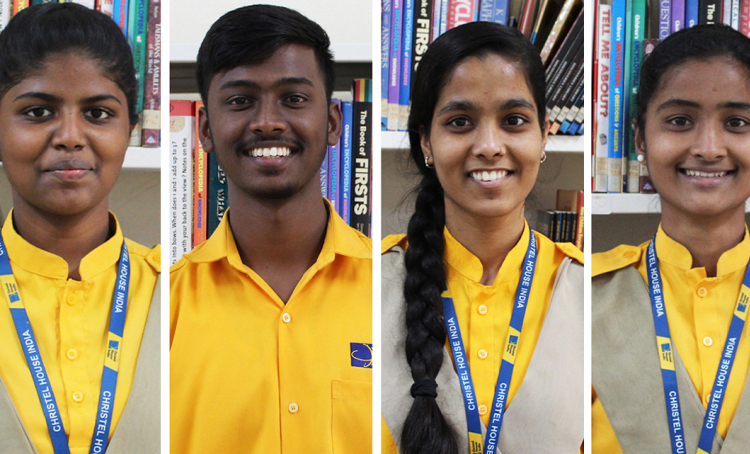 Four Christel House India – Bangalore 12th graders are celebrating their next academic steps. They’ve been admitted to one of India’s top universities, KREA University. (Pictured L-R) Deena C., Mohith T., Anusha P., and Cecilia B. are excited for the opportunity. “I was overwhelmed with joy as soon as I heard the news,” says Anusha.

The four students each received a scholarship from KREA to cover 100% of their tuition fees. In addition, Deena was awarded a scholarship to cover 100% of her living expenses. Her classmates also received scholarship support for half their expenses. “KREA University is one of the most sought-after universities in India,” says Jaison C Mathew, CEO, Christel House India. “Admission to KREA is a big deal.” Deena plans to major in Computer Science, Mohith will major in Physics, Anusha in Mathematics, and Cecilia is majoring in Economics. “My mother was very happy when I gave her the news of my admission,” says Mohith. Deena praises the Christel House College & Careers program for its guidance and support through the admission process. “A big thank you to Christel House India and all my teachers for providing me the best education for 13 years,” she says. “Now the school has helped me find the best university to build my career!”