Hope for a poor child 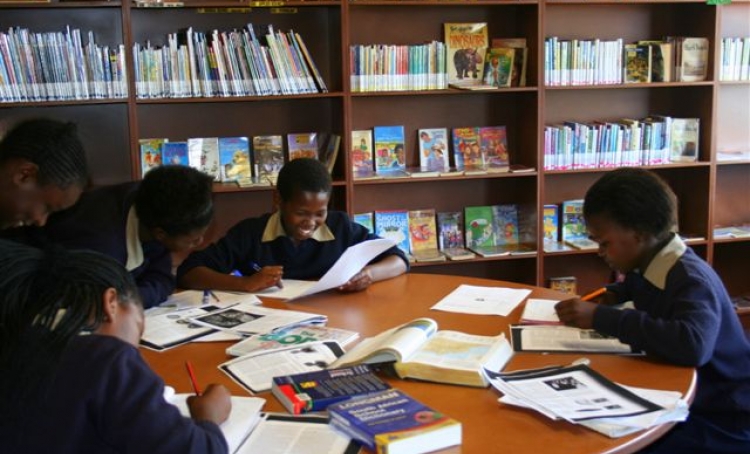 Cycle of poverty must be broken, says Flats school principal

We work against those things that have been transferred by the mother. We teach a child: Don’t just accept what life gives you. Stand up for yourself. As bright, shiny red as a grade one’s brand-new HB pencil: you feel it on the school grounds of Christel House in Ottery in the Cape Flats, when the principal, Ronald Fortune, walks about with a ton of little ones behind him. Sir, sir, they call. One slips his hand in Fortune’s. Hope. Because every learner here is the poorest of the poor. From squatter huts, zinc khayas, wendy houses. In fact, it’s a prerequisite for attending the school: if you live in a house, you’re too rich for Christel House.

For maths, that national toffee, Christel House has an 84% pass rate, a full 30% above the national pass rate. In athletics, they win regional competitions. One learner even went to the Youth Olympics.

Here, the school creates an unlikely future for over 700 children in a world where otherwise, only hopelessness and dagga plants flourish. This private school proves it: education in South Africa can succeed.

“It’s day two of the school year and we are in full swing,” greets Ronald Fortune. More than that: last year, in the last two, dead weeks of the year, they already started with the 2013 curriculum. And this morning at four, his teachers already received their first emails from out of the head’s office.

Teaching poor children, he emphasizes, is not business as usual. His wide smile is knowing. “You can teach a poor child till you’re blue in the face, but he probably won’t accomplish much.” Poor children, he believes, have to be handled differently. Ask any teacher: what is your greatest problem? The answer is likely to be ‘Uninvolved parents’. This is the fate of poor children – that fancy term – they are disabled by their milieu. This is what a person has to learn to understand, says Fortune. The cycle of poverty.

Take for instance Martha, 16 and pregnant. Her mother, Florrie, fell pregnant with her when she was 19, and Martha’s grandmother, aged 52 now, had Florrie at 17. So what are the chances for Martha’s baby daughter?

The same. These are people caught in a culture of poverty that runs deeper than just a shortage of money. It becomes a lifestyle, and they accept the hopelessness of their poverty. And this, in turn, they hand over to their children, Fortune explains. “We can do little for Martha, very little for Florrie, and nothing for the grandmother. But the baby – that’s another story.

“Research shows a child’s moral values and outlook on life is already formed by the age of nine or ten. We work against those things that the mother has passed on to the child.

“We teach a child: Don’t just accept what life gives you. Stand up for yourself. We bring dreams into their life, give structure to their dreams, which a mother won’t be doing anymore.

“There are learners here who go over the mountain in a school bus for the first time and see the sea – then they say they’re overseas. They don’t know about the world out there.”

Holistically, emphasizes Fortune – that’s how one has to approach education in South Africa. His current Matric class is the first Christel House group that has been there since Grade 1 – in other words, who have benefited from two full meals a day, at a table, with a knife and fork.

“For many children, that’s the only food that they get,” he says.

There’s a clinic with two nurses, three social workers, and bus transport. School continues until four thirty in the afternoon; sports are compulsory.

“Interestingly, in sport, our children almost have a killer instinct. The voluntary coaches all say they see in our children a real will to win,” he says proudly.

The will that their parents lost a long time ago.

A decade ago, when Christel House opened its doors, there was very little interest from parents.

“They just gave the place one look, as if to say, ‘What’s this?’ It’s a sign of the society. Our teachers had to convince parents from house to house. Now we are getting hundreds of applications.

Some communities’ children are virtually impossible to save. Pook-seBos, Bokmakierie. “You almost make no headway with the children. Some of them sleep around a fire at night. They come to school sick; there are lice, white marks on their heads. Gangs, drugs, dagga in just about every yard. Kids already know you just harvest it, wait till it dries, and then you smoke it.”

It’s a testament to the teaching methodology that Fortune and his team have managed to get three children from Bokmakierie through Matric – at that stage, they were the only high school students in their community. “Last year, five of our learners – who were classified as mentally handicapped – to through Matric.Foetal alcohol syndrome is a huge problem. They are children with brains at a standstill.” One such child especially touched Fortune’s heart last year. Bonga. He stayed in the Joe Slovo squatter camp.

“He is cognitively handicapped. Small build, small ears, little eyes, all the FAS signs. One time, I found him sitting and crying. I put him in my car and took him to MacDonald’s. And there, he just let it all out – everything in his heart. The circumstances at home. How scared he is to fail Matric. Everything.” A Big Mac, motivation and Bonga got his Matric.

It’s for all the Bongas that the over-qualified principal continues to do this work. In the office is a cupboard full of files with photos of each learner’s home. No matter how small it is, the parents have to provide a place where their child can study. “In this way, we know which children don’t have a spot to learn, and in the exam times, we take teachers in secret to the house.” This is teaching unplugged. Teaching that knows one nice little speech in the hall about sex isn’t going to change the trend of pregnancy at 16. “It’s a sustained effort.” Eric Jensen’s Teaching with Poverty in Mind has been read cover to cover in the school. Fortune shows what’s up on his office wall: painfully neat coloured cards for each child, each subject, also behavior, also character. Children are monitored continuously and placed in colour codes from gold to red (warning bells). In this manner, problems can be spotted and handled early on. “It’s so easy to lose a child.” And, he adds, it’s not easy to change character. He himself comes from a poor community. He was born in Bonteheuwel, walked to school barefoot. “I was the second matriculant in an extended family, and the very first who went on to study after school. I know about poverty. I know what these kids are going through. That’s why I want to help. And I see the difference it makes,” he says, and there is life in his voice. Here, no one can go untouched.

This morning, again, one of his star Matrics stood at his door and said: Mister Fortune, there’s no food in the house.

He always wanted to be a teacher. A maths teacher. The two master’s degrees and school principal career came later. Hy gave Christel House one look and said: This is where I want to be. Without the baggage of working for government; withoutSadou.

None of his colleagues are union members. “It’s their right, but there’s no need.” Just, rather, a love of teaching. “I want to stand at the top of a mountain and scream down at the department of education: ‘Children need to be in school; teachers have to be in class!’ We are wasting so much time.”

He stays just ten minutes away from the school. His own two children are at school in Wynberg. “I would have loved to send them here – the school offers so much more – but we are not poor enough,” he grins. And starts to laugh. Talks about the challenging phone calls from teachers to parents: ‘Your child is struggling with a certain subject, will you make a plan for extra lessons?’ “Here where we are, the school makes the plan.” The lowering of standards in education in South Africa worries him. “If you look back in history there were nurses at the schools, physical education, sport was important. Now you often see in the poorer communities how the schools are cordoned off, with the sports fields dilapidated and dying outside. So the physical development of the children lags behind.

“School is becoming limited to just the teaching. But what about balance? If the parents don’t facilitate it, how is the child going to get it?”

He believes, like Jensen, that the duty lies with the school. Here, he says, it’s not just about passing Matric. It’s about getting a life. The school has a work study programme for children for up to five years after Matric. A staff member is always on hand to help students get placed in universities, and continue to monitor them. “If they take a step backward, we bring them back into the school, give them a job, and help to get them back on the right course.

“We have great success – 96% of our former matriculants are working or studying.”

You see him in the office with his pens, frowning over the red worry-spots on his colour-coded cards. You see him in the classrooms, on the school grounds, like a spirited Robin Williams in Dead Poets Society. “Is this no longer what a teacher is supposed to do? We are not everything – not a psychologist, not a mother, but we look after them as though they are our own children.”

Captions: School is limited to only teaching these days. But what about balance? If parents don’t facilitate it, how will the child get it?

“96% of our former matriculants are working or studying.”