On and off the field, sisters support each other 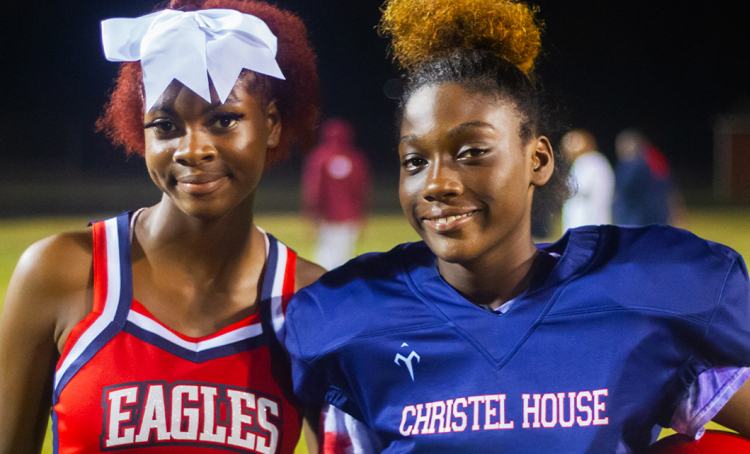 Friday nights are sister nights for Natavia (left) and Natalya (right). That’s when you’ll find the 9th grade twins under the lights on the Christel House Indianapolis football field – one on the sidelines leading cheers, the other on the field as a wide-receiver for the team. “It amazes me to see her on the field,” says Natavia.

Natalya always had an interest in football, inspired by watching her older brother play. She’s the first girl to play football at Christel House. “It feels good but it’s overwhelming,” she admits. While some were surprised when she decided to play football, she says she’s been welcomed by the team. A sprinter, Natalya enjoys track – and hopes to earn a sports scholarship, like her brother, to Indiana University so she can major in Computer Science. Natavia is passionate about cheer, basketball, volleyball and interested in becoming a history teacher or exploring a career in cosmetology. She’s proud of her sister. “She wanted to do it so bad. We’re both really happy that she was able to do what she wants to do.” The twins are grateful to be at Christel House Indianapolis and feel the school is preparing them for college. “We have each other’s back,” says Natavia. “I just want to stick with my sister for the whole journey,” concludes Natalya.