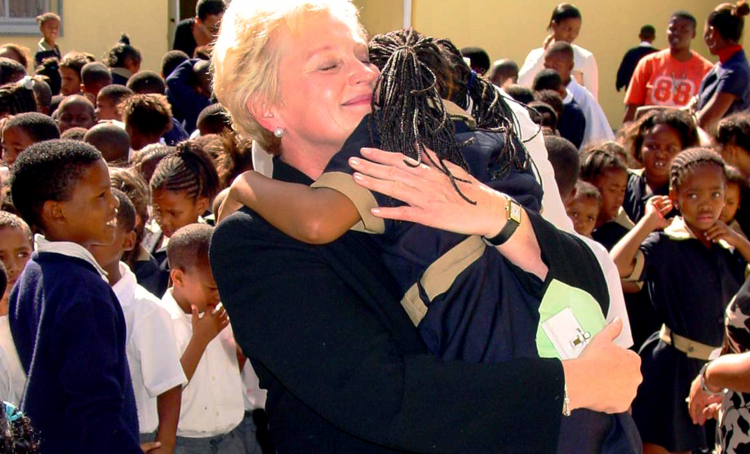 It is with immense sadness that we announce the passing of our founder, Christel DeHaan. Christel passed away peacefully after several years of illness on 6 June 2020 at her home in Indianapolis (Indiana, United States), surrounded by family. She was 77.

Born in Nördlingen, Germany, in 1942, Christel emigrated to the United States at the age of 20. By 1974, at the age of 32, she co-founded the timeshare business, Resort Condominium International (RCI). Under her leadership, RCI grew into a global enterprise with offices in 38 countries. In 1996, she sold RCI and in 1998 established Christel House International with the goal of transforming the lives of impoverished children around the world.

Christel House South Africa was established in Cape Town in 2001 and Carol Kriel, Christel House’s Junior School principal, still recalls how she and many other staff went door-to-door to recruit the school’s first students. To the staff’s amazement, many members of the public were very skeptical about a new school for underprivileged students that did not cost a cent. As part of Christel House’s holistic education model, all students receive a 100% scholarship on admission which includes all educational materials and uniforms, daily transport, professional health care, nutritious meals, psychosocial counselling and college and career support. As Kriel explains, “No one could believe that there was a person like Christel who was going to do all these amazing things for their children”.

Today, there are eight Christel House institutions worldwide, who collectively serve nearly 6,000 students and graduates every day. Christel’s love for the children has always been the driving force behind her vision. As Ronald Fortune, the High School Principal, explains, “The mission was always the children, and that was always clear with Christel.”

Christel’s steadfast commitment was unwavering and she used her business acumen to leverage social change with her love and humanity for people. Thanks to her careful planning, the work of Christel House will continue to be supported through funding from the Endless Success Foundation, an organisation created by her estate. It was her wish that all Christel House general and administrative expenses be covered in perpetuity. This allows all donor investments to continue to directly serve the programs and services needed by Christel House students.

Adri Marais, Chief Executive Officer of Christel House South Africa, said that condolences for Christel DeHaan are pouring in from around the world, from students whose lives had been changed by attending Christel House to colleagues who had the privilege of working alongside Christel. She added, “We will miss Christel dearly – who was an absolute force for change, and who had the heart, compassion and the vision to build an organisation that transforms thousands of lives throughout the world. We are blessed that we have been entrusted to continue Christel’s vision and her work within a framework of strong global leadership and financial stability.”

Members of the public are encouraged to leave messages honouring Christel DeHaan by clicking here.