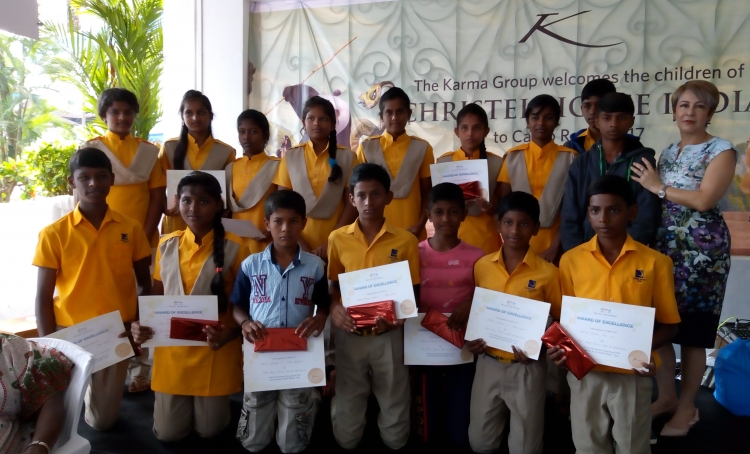 After several hours of planning and preparations, everyone awaited the innocent smiles of the Children of Christel House.  Just another sunny Monday morning at Haathi Mahal and the front desk staff were busy reading through names of the 68 children and 11 teachers from Christel House, India. Swiftly sorting room keys and arranging them for check ins.  The first bus arrived at half past 7 with the girls and the second one followed shortly with the boys. The children and teachers were accorded a traditional Indian ‘Aarti-tikka’ welcome in the lobby and shown to their rooms to freshen up before breakfast.  After a hearty breakfast, we explained the theme of the event to the kids –‘ Kung Fu Panda’ – like every Camp Royal, the 2017 edition had the kids divided into 4 teams that were scheduled to compete with each other during the course of the event while participating in fun activities like painting, games and talent shows. So we had team Po, team Tigress, team Mantis and team Viper – four of the action figures from the Kung Fu Panda franchise.

Once the teams were formed, Joe Fernandes our General Manager welcomed all the children and teachers to Karma Royal Haathi Mahal and promised them loads of fun and frolic over the next 4 days! All kids were given ‘3 Monkeys Club’ T-shirts and team wrist bands to be worn during the day.

Post lunch, afternoon snooze and an evening snack with ‘chai’, the children did what they were most excited about. They hit the pools! For a good 2 hours, the children romped in the pool, some played handball, others posed for pictures, sang songs and had a real blast! It was simply amazing to see the energy of these kids and the happiness they experienced when they were enjoying their pool time.

Dinner was served by 08:00pm followed by a special screening of the movie Kung Fu Panda 3. This was the culmination of Day 1 at Camp Royal 2017.

Day 2 was about creativity and contests in the first half and more fun and frolic in the water in the second half! Post breakfast , everyone had a canvas and a paint brush. The theme of the painting contest was ‘Global Warning’. The kids got cracking and produced stunning results displaying superb levels of creativity. Followed by the painting contest, we had a range of ‘one minute games’ for the children. These included ‘penalty shootout’, ‘cool bartender’, ‘paper cup pyramid’ and more. The games followed a short break before lunch that was relished by the kids particularly because the Chef had cooked their favorite Fish curry!

The kids, teachers and volunteers assembled in the lobby at 02:30pm to head to Froggyland waterpark. The kids knew that something incredibly exciting was coming up! Living up to the expectations, Froggyland proved to be an absolute delight for the children who first headed to the ‘lazy river’ then the ‘wave pool’, did a ‘rain dance’ and went down slides and water rides all around the park.

When they returned back, the fun wasn’t over yet, Magician Savio mesmerized the kids with his tricks and balloon sculpting before dinner time. It is a wonderful feeling at the end of the day when you feel tired doing nothing but simply having fun! And on this note, we ended day 2.

Surprisingly enough, the kids already knew what was in store for them on day 3! It seemed like we had a mole in the team  - the case has been handed over to the MI6!

Well, like I mentioned, everyone knew what we were doing that day and yes, the excitement was building! It was Beach Day! For most of the kids in the group, the beach was like a dream come true. It was the first time in their lives that they were going to feel the sand under their feet and play with the cool waters of the Arabian sea. The children enjoyed themselves on the shores under the watchful eyes of their teachers, volunteers and lifeguards.  Some built sand castles, some tried to burrow their feet in wet sand and others just hopped around as little waves crashed into them. We took a break for hydration and some snacks before the kids headed back into the water for the final session of beach therapy. Up on the lawns, the boys played soccer before lunch was served in picnic boxes as the kids sat around on bean bags and specially arranged tents. It was a warm afternoon and everyone enjoyed the Ice Cream Pops post lunch too!

Once the kids got back, they had a couple of hours for rest after which everyone gathered for tea and samosas. At 06:00pm, we had the Chirstel House Talent show – or

‘Christel House got Talent’ – as we like to call it!  Teams competing against each other with individual and group performances. We had dances, songs, fashion shows and even a Rap performance! Indeed the judges has a hard time deciding on the winners!

Towards the end of the Talent Show, we had our In house DJ – Darryl Greg performing for the kids. From the latest pop songs to hip Kannada and Tamil numbers were played for the kids to dance till they drop! Dinner followed the dancing and after everyone had their finger lickin’ ‘oreo delight’ dessert, we drew curtains on Day 3 of Camp Royal 2017.

The last day was about mixed feelings. All good things come to an end. The kids had to leave in a few hours, but before that we had the prize distribution. Espy, our President and MD, addressed the kids and was presented with a token of love from the Children of Christel House. Team Mantis won the Talent show and the Camp Royal Championship while many others won individual prizes. Gifts were given away to all children – each of them got either a football or badminton racket based on their preference. The morning was made special when Mr. Shiva Sagar a former Christel House student and now a teacher gave the vote of thanks and testimony to say how much Christel House and the Karma Group have impacted his life and the lives of many like him.

After a group picture was taken, the kids went back to packing and were ready to leave in lobby by 12 noon. Packed lunches, water and other provisions were loaded up in their coaches for the journey to Bengaluru. We bid farewell to 67 incredible kids and their teachers who just had the most amazing time of their lives with us. And it wasn’t just them, it was us too. Being able to host these lovely kids is a truly gratifying experience.  Some kids (and staff) were teary eyed when the goodbyes were being said and others waved at us hoping to meet us again someday!