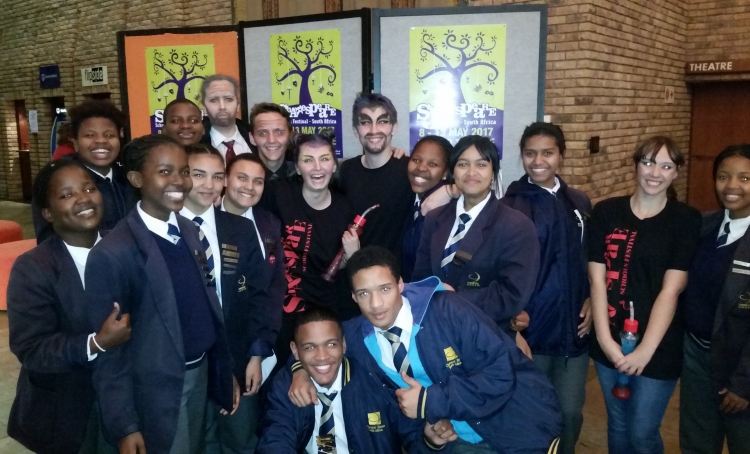 Nelson Mandela is revered across the globe. In South Africa, he is described as the “Father of the Nation.” What many may not know is that when imprisoned at Robbin Island, Mandela and fellow prisoners gained access to a book of Shakespeare’s complete works. That book had an impact on the future leader of South Africa according to Cedric Esterhuizen, Head of Language Arts for Christel House South Africa. Esterhuizen teaches his classes the works of Shakespeare. “What really struck the students was that the literary selections that they are studying at school actually influenced the thinking of one of the greatest leaders of our time.”

Through an invitation to Christel House, twenty students from grades 9 through 12 recently attended the Shakespeare Schools Festival. “We cover a range of Shakespearean plays in the high school – “The Merchant of Venice,””Romeo and Juliet,””Othello” and “Hamlet,” according to Esterhuizen. The teacher jumped at the opportunity to take his students to see the stage performances. How the students reacted inspired their teacher. “The students were so into it that by the end of the evening, while walking to the buses, students erupted into spontaneous soliloquies. As a teacher at Christel House South Africa, this was one of those moments where a feeling of immense pride in my students and affirmation of making a difference in their lives was never more tangible than that night.”

Christel House South Africa is working to schedule a workshop at the school on performing Shakespeare with the managing director of the Shakespeare Festival. “There’s something for everybody and this is what makes Shakespeare so interesting for the students – they can relate to it,” says Esterhuizen.