Succeeding against all odds 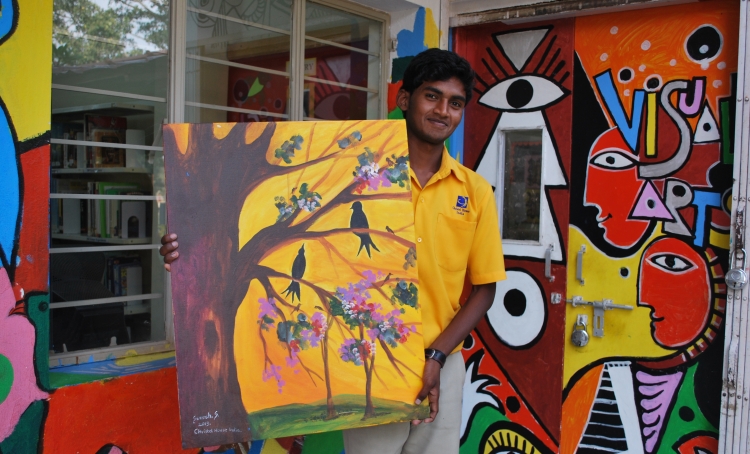 Drop out of school. Go to work. Earn money and support the family. This often describes the life path of impoverished children. When Suresh finished grade 10 at Christel House, his mother, Radha, desperately wanted him to leave school.

After all, completing 10th grade was far more than most boys in his country accomplished. Radha had been suffering from tuberculosis, was often bed-ridden and had been unable to work since Suresh was 10 years old. Without a husband, she was forced to put Suresh and his younger brother in a youth hostel, and move into a homeless shelter. Reuniting her family was important.

Suresh’s goal—applying his brilliant artistic skills to study animation at university—would be waylaid without a 12th grade education. Quiet, shy and dependable, Suresh was ready to sacrifice his own future to take care of his family, but Christel House social workers stepped in to explain to Radha that with two more years of schooling, Suresh would secure a better job and make more money.

Education. It's not the road every student in Bangalore takes. But it's the right path for Suresh—and many other Christel House students. "I want our children to understand that education is the route to employment—and to have the courage to combat inequality," says Jagruthi Vemulkar, principal of Christel House India – Banglaore Senior School.

Recently, Suresh's mother passed away. Now Suresh helps care for his younger brother, who lives in a hostel. The good news is that Suresh has been selected by Transguard Group in Dubai, and will begin working there in June 2015 after he completes his 12th standard (grade).

"I know I have made the correct choice," Suresh says.

Learn how you can help pave the way for determined students like Suresh.