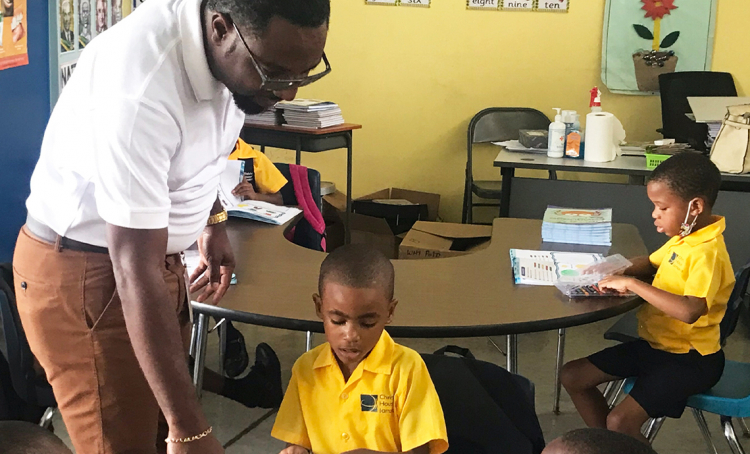 “As Jamaica approaches the end of the hurricane season, we have faced two scares in relation to hurricanes coming our way,” says Jason Scott, Christel House Jamaica Principal (above with students.) While Jamaica was not hit directly, heavy rains did cause flooding and closed the school for three days. “I was impressed and thankful for the effort of the team throughout the ordeal.”

Scott has experience dealing with Jamaica’s tropical weather – he completed his Bachelor of Arts and Advanced Diploma in Education at the University of the West Indies in Jamaica, earned a Master's in Education with Saint Mary's University of Minnesota, and completed principal's leadership training with the National College of Educational Leadership in Jamaica. He was a classroom teacher for 13 years in Early Childhood, Primary and Secondary education institutions, then served 6 years as principal of two Primary and Infant schools before joining Christel House Jamaica. “I have been impressed at the extent to which the students are provided for based on their scholarships,” Scott says of joining Christel House. Dealing with the recent tropical weather, he says information is critical. The principal says communication was consistent and frequent. “With parents, WhatsApp groups and phone calls were the main sources of communication, and this proved to be very effective as we were able to keep abreast of the situation in the different communities.” As flood waters receded, the school team quickly got back to normal operations. “All staff members were safe throughout the period and no reports were received about student or parent injuries.” For Scott, that was the best news. “Dealing with conditions like this and similar weather situations are not new to Jamaica,” he says. “We have developed a fortitude for it and continue to develop and evolve.”