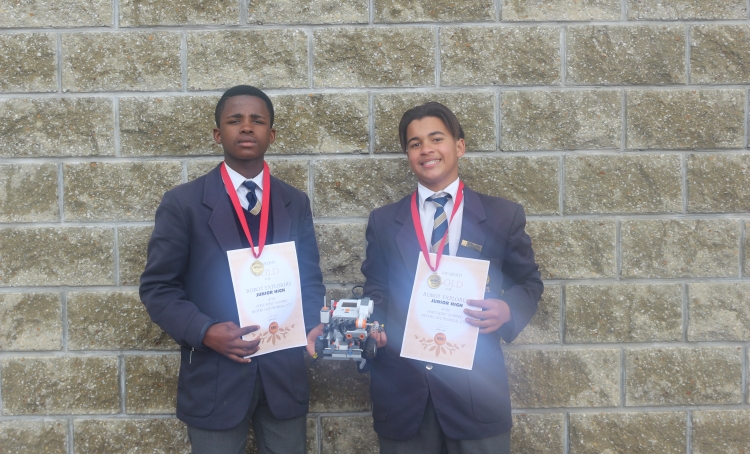 A team of grade 10 students from Christel House South Africa (CHSA) brought home the gold when they won the World Robot Olympiad in Cape Town. The amazing engineering accomplishment is even more impressive because it’s the first time students Storm S. and Siyamthanda N. had ever competed in a robotics contest! For the competition, the teammates were required to work together to assemble a robot to solve a specific problem. The fastest robot around the course that completed all the assigned tasks successfully was then declared the winner. “We won, we actually won,” declared Storm after the event. “The Robo Knights” from Christel House South Africa are now the top ranked team in the country and got the opportunity to compete in the national competition in Johannesburg. Coach Cedric Esterhuizen says the students are very excited to represent their school at such a prestigious event. Esterhuizen is proud of his student’s dedication and their talent. “Teamwork is essential in this competition. It’s a 21st century skill we nurture at Christel House South Africa.”

UPDATE: The Robo Knights did a remarkable job in the national competition. They finished fourth in the country. Cedric Esterhusizen says the team did a wonderful job. The competiton started with over 800 teams and the Christel House South Africa team placed fourth. He noted, "What makes this even more extraordinary is the fact Christel House only started robotics in April of 2017!"