I Owe My Dad this Degree 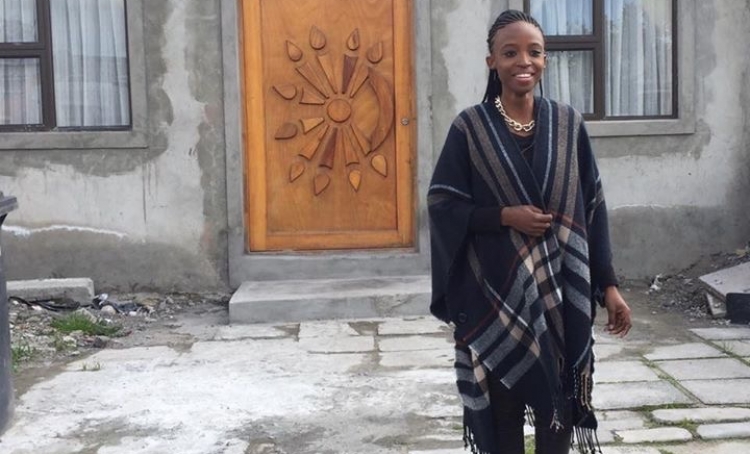 Abandoned by her mother, raised by her father, valedictorian of her graduating class and admitted to Stellenbosch University—one of Cape Town’s most prestigious institutions—heartbreak, struggle and determination mark Zola’s journey.

Her father, Zolile, raised her from the age of 18 months after her alcoholic mother deserted them.

“He always wanted the best for me. I am from Langa, a township known for extreme poverty, but was sent to schools in more prestigious areas even though the fees and transport costs had to be shouldered by my dad, who worked as a driver for a car dealership.”

Her father was laid off when Zola was in the 3rd grade. He struggled to keep their heads above water, she recalled.

“One day, just before I was to start Grade 4, he sat me down and explained he could no longer afford to pay for me to attend school. He promised me he would sort it out soon and until he did, I was to go to the local library every day and read.”

On every school day in 2001, Zola would be at the Langa library when it opened. Her father would join her in the afternoon and tutor her in basic math.

“My dad wasn’t an educated man. He had passed Grade 4 when he dropped out to work and provide for his family. But he believed in the power of education. He wanted the best for me.”

That year her father, who later started a small takeaway business, heard of an independent school aimed at improving the lives of needy children. He took her to Christel House South Africa.

Because Zola did not have a school report for that year, she was assessed to determine in which grade she would be placed.

“I was found to be competent for Grade 5. Because of those hours in the library, I was able to skip Grade 4.”

Her years at Christel House were among her best, she remembered.

“I took part in everything – choir, public speaking, you name it; I was there.”

In Grade 12, she was named the valedictorian.

“I was in tears and almost unable to talk when I spoke of my gratitude for my father and all he had done for me. My friends later told me my dad had been just as emotional. This was weird for me. My dad never cried.”

Zola applied at a number of universities after graduation, eventually settling on studying political science at Stellenbosch University.

“I remember my dad and me taking the train to this faraway place. We were broke. He had a bank bag of 10c and 20c coins to pay for our tickets.”

“My registration and fees came to over R10,000, but my dad stood outside as I followed the registration process without the cash.”

“He told me to tell the assistants that he was a pensioner and to show them the marks I had achieved. When I did, I was sent to see a man in the finance department. He looked at my report, nodded, and signed a slip which I had to take with me. I didn’t pay for anything that day.”

Her father was proud that his daughter was going to attend one of the top universities in the country,” Zola said, smiling.

“He wasn’t a man of many words, though. But his face said it all. The years had been stressful for him and everything was finally coming together.”

After she completed her first year, Zola’s father died at the age of 70. She lost her home where she grew up after he passed.

“I kept going, remembering all he had taught me. He always told me to speak up and to be proud of where I came from. He insisted that I never allow anyone to make me feel inferior.”

She suffered from depression in her third year and dropped out of university in 2012.

“I realised I had no one. My dad had been the one who was always there for me,” she said.

“But in the past four years since I left, I have realised that I need to go back. After all the sacrifices he made, I owe it to him and to myself to get that degree. My dad didn’t spend his last coins to get me to Stellenbosch for me to simply walk away from it. I need this.”

She hopes to complete her studies part time while working at Christel House as the executive assistant to the CEO.

She spends time encouraging pupils, especially girls, to aim high and go on to bigger and better things.

“I try to teach them to be proud of who they are and where they come from. My dad taught me that. And I believe in looking people in the eye when I tell my story. It’s who I am. I need to own it.”

(Adapted from an article written by Tammy Petersen, News24)